When you visit this website, it may store or retrieve information on your browser, mostly in the form of cookies. This information might be about you, your preferences or your device and is mostly used to make the website work as you expect it to. The information does not usually directly identify you, but it can give you a more personalized web experience. Because we respect your right to privacy, you can choose not to allow some types of cookies. Below is a list of different categories of cookies that may be set and that you can freely change. However, blocking some types of cookies may impact your experience of the site and the services we are able to offer.

Frends is also designed to serve all users in the best possible way: it simplifies the daily lives of corporate integration managers while streamlining the work of developers. The main goal of the user interface is to provide a tool that makes the daily life of technical experts easier. With Frends, you can quickly make versatile, secure, and reliable system integrations and process automation. The operational monitoring is all visual and full access to the data that went through the integration and automation processes.

Frends is based on agent architecture. An agent is an integration runtime that talks to the user interface and executes all implemented integrations. An agent is kind of "stupid", and all the information related to the integrations is stored in the UI agent's database. All agents are controlled via a centralized control panel in the cloud. Frends is a truly hybrid integration platform, meaning agents can be installed in on-premise, containers and any cloud provider. Yet agents are controlled centrally via single development and operational view. 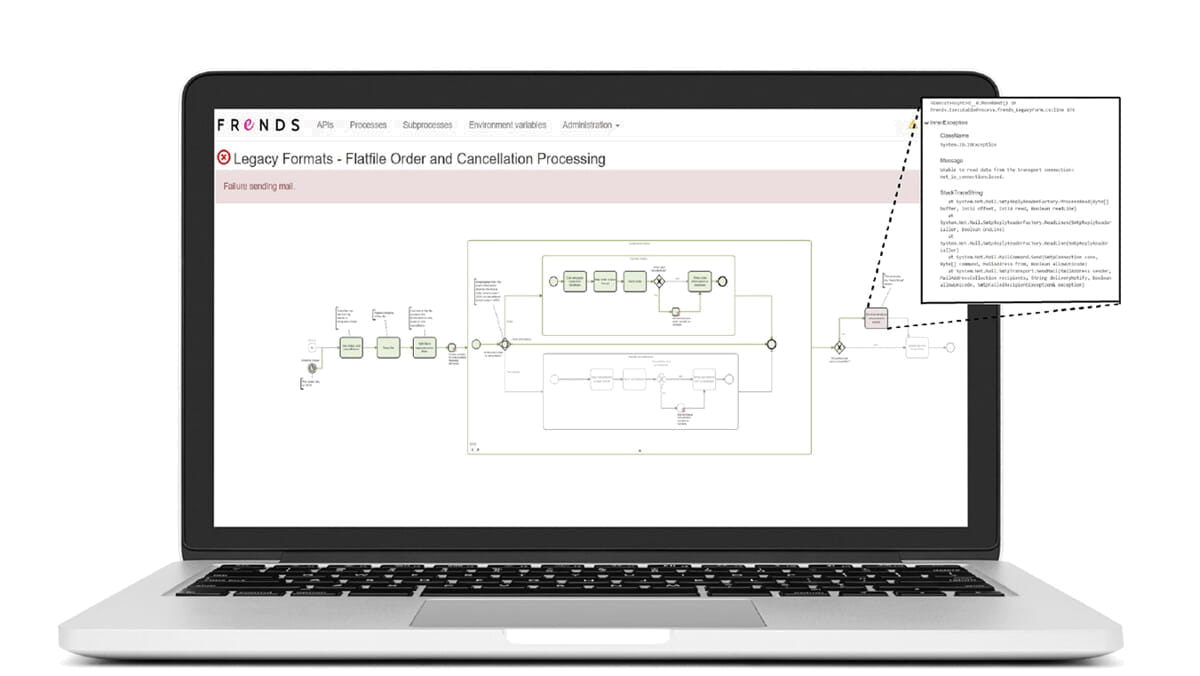 Frends is a low-code integration platform.

Frends development is based on visual low-code, and integrations are built with BPM notation to flowcharts using ready-made components called tasks. Frends processes consist of visually orchestrated Frends tasks. A Frends process can be hosted as an API following OpenAPI standards in any Frends agent. A Frends process can also be scheduled process automation orchestrating robotic process automation (RPA). The capabilities of an integration platform and a visual language with huge power of expression Frends has built-in version control and deployment framework that support DevOps development. Versatile monitoring views speed up incident management and problem-solving and provide business and integration managers comprehensive information on execution history.

Frends is a safe environment to implement both APIs and other integrations, with diverse libraries of different tasks. So, there really is no need to reinvent the wheel. Frends development is easy to learn and you can get started quickly with even a little programming experience. In addition to ready-made tasks, a more experienced developer can take advantage of code snippets. Developers may also create new tasks of their own. These tasks can be shared in Frends community.

Frends follows the DRY principle, and the developers do not have to repeat themselves. On the other hand, copy-pasting processes and tasks are also easy when needed. Process-specific version control makes parallel development easy and secure. Rollback to older versions has also been made easy.

Running of individual tasks and processes can be easily tested during development. Deployment from one environment to another is also possible with one click. The developer can concentrate on the essentials when all the “boring stuff” is automated.

The possibility to do almost anything can easily become chaotic if the development patterns have not been agreed on. Because Frends development is easy to learn, many customers use their own internal resources for implementation work in addition to integration consultants. In this case, the common and agreed development practices are emphasized, so that the implemented integrations are equivalent and of high quality.

BPMN workflow gives a nice overview but you have to know where to look for the details.

Sometimes the number of ready-made tasks can be confusing. As with other development work, in Frends development one “just has to know” when it’s worth using ready-made tasks and when to use code. In addition, when the same thing can be done in many ways, one must understand the bigger picture at all times to make the best choises for each case.

While the Frends interface is versatile, and the graphical BPMN diagram makes communication with less technical parties easier, many details can easily stay hidden, at least at first glance. While the documentation becomes easier with ready-made flowcharts, its importance is also emphasized.

Join our Growth Journey to the leading eiPaaS in the Nordics and Europe and create things that would seem ridiculous today.

Let’s recruit together and find your next colleague.